Pittsburgh’s World Refugee Day celebration will be held this Friday, June 19th from 11 a.m. to 2 p.m. in Market Square in Downtown Pittsburgh.

The family-friendly event is free and open to the public. World Refugee Day will feature local refugee groups performing traditional musical and dance numbers, cultural crafts and activities for kids. Traditional cuisine representing countries around the world, including Nepal, Zambia, Kenya and several other ethnicities, will be available for purchase from local restaurants and vendors (cash only). 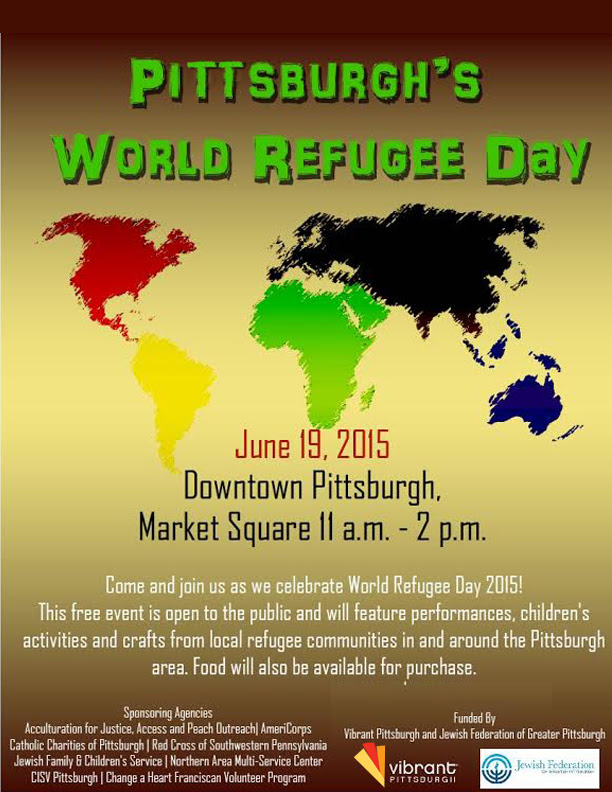 World Refugee Day was established by the United Nations to honor and recognize the approximately 42.5 million refugees, internally displaced and stateless people around the world who are forced to flee their homes under threat of persecution, conflict and violence. The observance of World Refugee Day in Pittsburgh is a collaborative effort of the major refugee resettlement agencies and service providers in the local community. The annual event debuted in Pittsburgh in 2012.

The event is funded by the Jewish Federation of Greater Pittsburgh and Vibrant Pittsburgh. Northern Area Multi-Service Center Acculturation for Justice, JF&CS, Access & Peace Outreach and Catholic Charities along with the Red Cross of Southwest Pennsylvania, Greater Pittsburgh Literacy Council, AmeriCorps, CISV Pittsburgh and the Change a Heart Franciscan volunteer program partnered to put on this year’s event.